"The Constitution of the United States does not provide that materia medica shall make laws to regulate man's religion; rather does it imply that religion shall permeate our laws. Mankind will be God-governed in proportion as God's government becomes apparent, the Golden Rule utilized, and the rights of man and the liberty of conscience held sacred." The First Church of Christ, Scientist, and Miscellany, p. 222.

In these words, Mary Baker Eddy reveals her deep admiration of the Constitution. What she saw in it was not a hiding place for irresponsible religionists, but rather a national governance with respect for the right of individuals to practice religion free from political intervention. For some, the language of the Constitution makes prayer a genuine choice in health care, not merely a backup for conventional medicine. 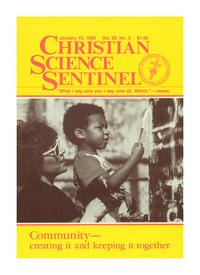