The Editors hadn't planned to have the Editor make this...

The Editors hadn't planned to have the Editor make this confession in public, but the more they thought about it, the more it seemed worthwhile. Here it is. Up until last year he didn't have a Christian Science Sentinel subscription of his own.

Would you believe it? How could such a thing be? How could such a "lapse" come about? Well, the Editor says he doesn't know. It was just that the subscription to their home was in his wife's name, and he read her copy—and he had access to a few office copies, as you can imagine. Such excuses! But slowly the light dawned that in order to support fully the Sentinel and The Christian Science Journal and other publications of The Christian Science Publishing Society, he needed to be subscribing in his own name as well as contributing and praying. Now he is (you probably saw this next line coming)... and he hopes you are too! 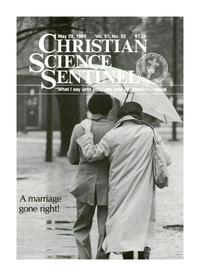