Ever feel chained to the television?

With the average American household watching seven hours of TV a day, it might be well to ask some hard questions of our TV watching. Are we in control, or is the TV?

I Missed the first three installments of a television miniseries I had made plans to see, but finally was able to watch the fourth program. The series had been highly touted by the local newspaper and concerned a period of history that particularly interests me.

But after an hour or so of watching the program, I felt rather empty. It occurred to me that I had seen very little history. What I had seen was a number of attractive men and women, in historical costumes, pursuing various extramarital relationships.

Send a comment to the editors
NEXT IN THIS ISSUE
Article
The most important single lesson I have learned... 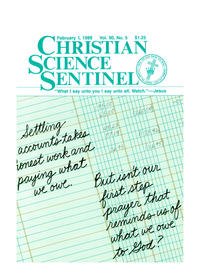