When an ordinary life is made extraordinary

Before that day, life must have been rather commonplace for them. They were "regular" people, a couple of "average" men tending to the normal day-to-day affairs of living in the world. They worked hard, rising early and only finishing their work when the sun began to sink behind the horizon—and sometimes not even then. As it is for most of us most of the time, there would have been a basic routine to their lives, and undoubtedly they were well settled into it.

But on that particular day, something remarkable was to happen. They were about their business as usual when another man approached them with a most unusual proposition. Previously the two men may well have been drawn to Jesus' work, but they surely didn't expect that he would be passing their way just then. As he was walking along the shore of the Sea of Galilee, Jesus saw the two fishermen casting their net. He called out, "Follow me, and I will make you fishers of men."

Send a comment to the editors
NEXT IN THIS ISSUE
Article
How do we pray? 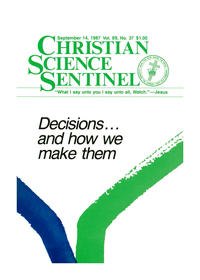