A book that heals

To think that reading a book can result in physical healing and can make sin seem absurd stretches human credibility. The first time I sought healing by reading Science and Health with Key to the Scriptures by Mrs. Eddy, I didn't know what to expect. But within a short period of time I was healed of a serious disease. Not long after that a quick healing of an injury I had received on the football field took place.

I tried to understand how such healings happened, based upon the reading of a book. At first I speculated it was a matter of mentally holding an image in thought of what a normal, healthy organism would be like. And yet I knew that in the cases where I had been healed I hadn't even thought about such things. Then there was a brief period of time when I tried to go back to previously held theological beliefs for an explanation. I tried to conceive of God knowing me much as one human being knows another. And then God—as one influence among many—would be thought of as working a change in me.

Send a comment to the editors
NEXT IN THIS ISSUE
Testimony of Healing
There we were, strangers in a charming city, perched sixty-four... 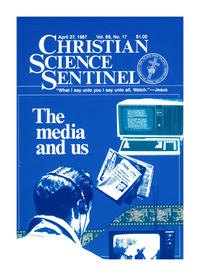