A recent headline in The New York Times naturally caught a colleague's attention as he was reading the paper one morning. Through his study of Christian Science he has grown to have a deep love for God and spirituality, or "the things of the Spirit," as the Bible puts it. The newspaper headline had declared, "Spiritual Concepts Drawing A Different Breed of Adherent."

As my friend read on, however, it was clear from the first paragraph that this was a view of "spiritual concepts" that diverged radically from his own solidly Christian vision of spiritual reality. The opening sentence of the article stated, "Representatives of some of the nation's largest corporations... met in New Mexico in July to discuss how metaphysics, the occult and Hindu mysticism might help executives compete in the world marketplace." 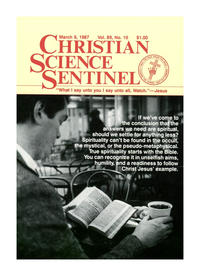