Understanding the source of real spiritual peace to be in God begins to change not only our own lives but the lives of those around us.

The other day an item came across my desk that gave me pause. I could hardly put it down, and when I did, its message stayed with me. It was an article by a man who had been in one of the worst concentration camps in World War II. He told of a fellow inmate, Jeremy, who had not only been able to find peace and joy himself but had also been able to share this with others. Of this man the writer said:

"Jeremy was an example: he found joy in the midst of Block 57. He found it during moments of the day where we found only fear. And he found it in such great abundance that when he was present we felt it rise in us. Inexplicable sensation, incredible even, there where we were: joy was going to fill us. 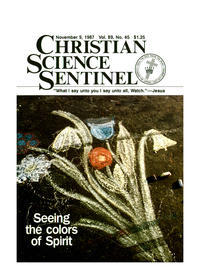