When I was a sophomore in college I became very ill

When I was a sophomore in college I became very ill. At the strong urging of my friends and out of concern for others in that college community, I went to the college infirmary for a diagnosis. I had no intention, however, of relying on anything but Christian Science for healing.

After performing various tests, the college physician informed me that I had contracted mononucleosis and could expect to be laid up in bed for several weeks. He recommended that I take a certain antibiotic, wrote out a prescription for it, then advised me to go home. My closest friend at college had recently had this same problem, and she told me and our other friends that she had been confined to bed for five to six weeks.

Send a comment to the editors
NEXT IN THIS ISSUE
Testimony of Healing
"I have so much to be grateful for, and I am grateful, and... 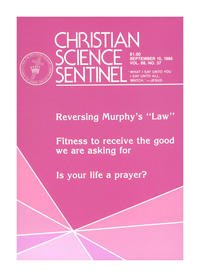