Plunging "beneath the material surface of things"

For millenniums mankind has sought answers to the questions "What is man? What is the explanation of the universe?" While there has obviously been a great deal of religious thought and scientific research given to these questions, such studies have nearly always halted at the point of viewing man and the universe as either wholly or largely material. The result has been frustrating because, from the material standpoint, final answers seem as far away as ever.

Lincoln Barnett, in his classic book The Universe and Dr. Einstein, summarizes the impasse succinctly. He writes: "In the evolution of scientific thought, one fact has become impressively clear: there is no mystery of the physical world which does not point to a mystery beyond itself. All highroads of the intellect, all byways of theory and conjecture lead ultimately to an abyss that human ingenuity can never span. For man is enchained by the very condition of his being, his finiteness and involvement in nature. The farther he extends his horizons, the more vividly he recognizes the fact that, as the physicist Niels Bohr puts it, 'we are both spectators and actors in the great drama of existence.' Man is thus his own greatest mystery." The Universe and Dr. Einstein (New York: William Sloan Associates, 1948), p. 113 .

Send a comment to the editors
NEXT IN THIS ISSUE
Article
Who wants a better body? 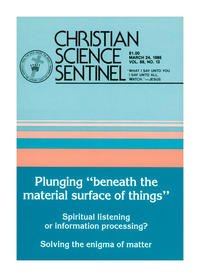