When Christian Science found me more than four years ago,...

When Christian Science found me more than four years ago, life seemed bleak indeed. I was living alone at a subsistence level and had few friends. Also I had been job hunting for some time with no results. Many years before, I had given up on churches with some degree of bitterness, feeling that God had abandoned me during a series of terrible events in my childhood, which I had been powerless to control. I hadn't consciously prayed for perhaps ten years. Now, however, I had nowhere else to turn, as all my human efforts had failed and I was deeply discouraged. I was still a young woman, and I couldn't imagine living the rest of my life in poverty and despair.

As it has been said many times, "Man's extremity is God's opportunity." I remember praying at the time, "'Thy will be done.' Show me what You want me to do." Not long after, I was having breakfast with a friend who was always cheerful. I told her I felt that she had a source of strength in her life and asked her what it was. She was most loving and generous in telling me about Christian Science. After our breakfast we walked back to her apartment and she gave me several copies of Christian Science periodicals. This was on a Saturday. When I asked her if I could go to church with her the next day, she warmly welcomed me. 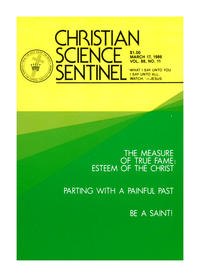