Are we really willing to change?

Two men, centuries apart, one a religious zealot and the other a man with a history of guilt, each had a remarkable spiritual experience that altered the course of his life. In the Christian Science textbook, Science and Health, Mrs. Eddy illustrates, through their experiences, how Christ, Truth, changes human consciousness. In the chapter entitled "Science of Being," she discusses the two men: Jacob of the Old Testament and Saul of the New Testament.

Jacob tried to get his brother's inheritance through dishonest means, we learn in Genesis. Saul's apparent hatred of the teachings of Christ Jesus prompted him to pursue the Master's followers to jail them. But something within the consciousness of both men, a gleam of the Christ, led them to a higher plane of thought and action. As a result, Jacob's estrangement from his brother, Esau, whom he had cheated out of his birthright, was healed. With the God-given name of Israel, he became the father of the twelve tribes. When the light of Truth suddenly broke upon Saul's thought, his whole life was changed. Under the name of Paul, he became a devoted Christian, spreading the gospel of Christ Jesus throughout the Roman world. 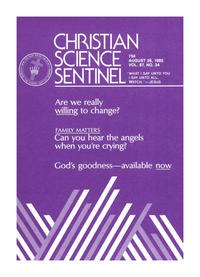