I have been a student of Christian Science for almost seventy...

I have been a student of Christian Science for almost seventy years. Our family was introduced to this Science by an uncle who, as a young man, was confined to a wheelchair with what had been diagnosed as bone cancer.

One of the doctors attending this uncle suggested that he investigate a new religion called Christian Science. So my uncle secured a copy of the textbook, Science and Health by Mrs. Eddy. He also dismissed the doctors and engaged a Christian Science practitioner to help him through prayer. After several months of studying the textbook and having help from the practitioner, my uncle was healed. He lived a long and active life. Eventually my sister and I, who were children at the time, were enrolled in the Christian Science Sunday School.

Send a comment to the editors
NEXT IN THIS ISSUE
Testimony of Healing
It is with gratitude that I share this testimony in the hope that... 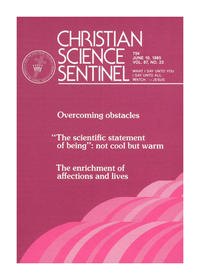