The Christ spiritualizes the creed

Having attended the Christian Science Sunday School, where the truths of God and man are so simply and beautifully imparted, I had never really understood just what was meant by the "creed" that I had so often heard mentioned by those attending churches of different denominations. I had, however, always imagined it related to words rather than deeds.

As the thought of the creed kept coming to thought in the words from one of Mrs. Eddy's poems included in the Christian Science Hymnal—"Thou the Christ, and not the creed;/Thou the Truth in thought and deed" Hymnal, No. 298. —I decided to look up the word in a dictionary. I found two definitions: "a formal summary of religious belief" and "an authoritative statement of doctrine." This confirmed what I had always thought the creed might mean. I then turned to the Christian Science textbook, Science and Health, where Mrs. Eddy asks, "Have Christian Scientists any religious creed?" Her answer is "They have not, if by that term is meant doctrinal beliefs." Science and Health, p. 496. She then elaborates six Tenets, which demand a high standard of Christianity on the part of those who are endeavoring to be faithful to the teachings of Christian Science.

Send a comment to the editors
NEXT IN THIS ISSUE
Article
After the healing, what to notice 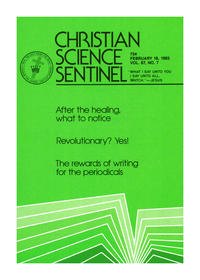