I was running to catch the six o'clock commuter train. There wouldn't be another one for an hour. When I finally reached the station and looked at my watch, however, I gave up. One minute to six, and the platform for my train was the farthest one away. I'd never make it. Then I looked up at the enormous station clock. It also said one minute to six —but what a huge minute! Much bigger than the tiny one on my watch! So I started to run again, and made my train just as the conductor was closing the doors.

I've thought about that big minute many times since, when I've felt thwarted by not enough time or money or ability. How often we limit ourselves and don't start a project because we believe we'll fail. Frequently the obstruction masquerades as human logic. (It was certainly "logical" to give up on catching that train.) But we can gain dominion over material constraints as we accept the freeing spiritual fact, brought out in the Bible, that we are the children of God, His image and likeness, not struggling, frustrated mortals.

Send a comment to the editors
NEXT IN THIS ISSUE
Editorial
Welcome Truth's stirring effects! 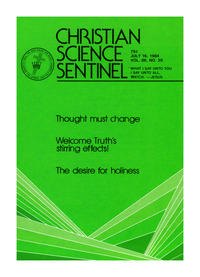