At one point I was virtually addicted to cola

At one point I was virtually addicted to cola. I remember many a morning crawling out of bed and heading straight for the refrigerator to get a drink of cola. My husband for years had been a coffee drinker, relying on it especially during his college years, to keep him awake so that he could study late at night and then to wake him up in the morning. Although I could see clearly that my husband was addicted to coffee, I was ignorant of my own dependency on cola—until someone bluntly pointed it out to me. It was then I realized that the cola habit had to go.

For over a week I prayed concerning this situation. I also talked about it with a Christian Science practitioner. I knew I didn't want this dependency, but I also knew that freedom from it needed to come through something more than human will, if it was to be permanent. For me that something more, above all else, was the desire to be obedient to the spirit of this statement of Mrs. Eddy's (Science and Health, p. 406): "The depraved appetite for alcoholic drinks, tobacco, tea, coffee, opium, is destroyed only by Mind's mastery of the body. This normal control is gained through divine strength and understanding." I was helped in my stand when I read this in Science and Health (p. 183): "Divine Mind rightly demands man's entire obedience, affection, and strength. No reservation is made for any lesser loyalty."

Send a comment to the editors
NEXT IN THIS ISSUE
Testimony of Healing
My gratitude for Christian Science, and for the many blessings... 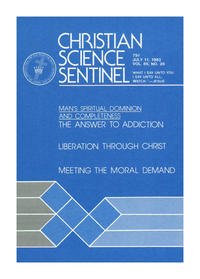