My father first brought Christian Science to our home when I...

My father first brought Christian Science to our home when I was sixteen. I took it up seriously because I was then suffering from bronchitis. (I had been taken to several doctors but had found no relief.) During a period of deep study and prayer I began making progress, and the healing took place. After my marriage in 1930 I joined a branch Church of Christ, Scientist, and later joined The Mother Church. Over the years since then I have had many healings.

One healing occurred about three years ago. I was suffering from a painful condition of the throat, which had caused me many sleepless nights. I was First Reader in the branch church I belonged to at the time, and this position called for a clear, strong voice. Despite the throat condition, I never had any trouble speaking the times I had to read, for which I was very grateful. Yet many mortal suggestions came to me, one of which was: "Your father suffered like this and passed on as a result." This awakened me to the belief that I was being influenced by heredity. At once I refuted this by praying for my father, knowing that he was and always had been the idea of God, Spirit, not matter—and that he was free now, as in reality he had always been.

Send a comment to the editors
NEXT IN THIS ISSUE
Testimony of Healing
When I was a boy, I was run over by an automobile 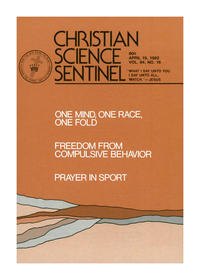