These words stood out as I read the familiar account in the sixth chapter of John. A feeding of so many from the few loaves this lad had brought along. Nothing occurred as happenstance in the life of Christ Jesus. What lesson could be learned about the Science of Truth, which he applied to all situations?

Commentaries had often provided me with fuller insights into Bible times, so I turned to one now. The boy had barley loaves, and there were some notes about this: "Wheat bread was more common; barley loaves were cheaper and served for the poor." Perhaps, then, this boy was from a poor family. Something else: "Luke xi 5 seems to indicate that three loaves were looked on as a meal for one person." The Anchor Bible (Garden City, New York: Doubleday & Co., Inc., 1966), Vol. 29, p. 233 . He had five loaves. Could it be, I thought, that the generosity of his mother had provided him more than enough so he could share? In any case, wasn't it the lad's willingness to share the loaves and fishes that had drawn him to the attention of the disciples and Jesus? Here was surely the law of Love in action. 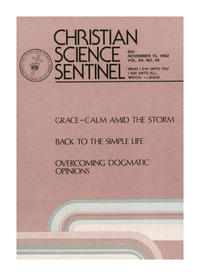