From racism to the recognition of true identity

Progress in human affairs appears by degrees, through improved concepts or beliefs. An infant learns to crawl before he learns to walk. We pick up arithmetic before we master calculus. The stagecoach has given way to jet travel.

In each of these illustrations the second stage indicates an advanced level of understanding and accomplishment. Limited concepts yield to progressive enlightenment.

In the area of race relations also, the irresistible propulsion of God's law of progress can be seen. Legislation in the United States has done much to improve inequities in its educational system. The equal employment and housing acts have dispelled some of the shadows of unemployment and unfair restriction. Such steps are indications of a greater awareness of a fundamental spiritual fact underlying creation—one God as the Father of all.

But there is much still to be accomplished. The beliefs of racism seem deeply entrenched. They claim to rob one of his God-given dominion, leaving their victim helpless before the tyrannical forces of inequity, injustice, and hatred.

The need to continually dematerialize and spiritualize our concept of God, man, and the universe confronts us on every side. This spiritualization clears the fog of racism and leaves no consciousness through which it could claim to operate and no victim. The spiritual view reveals life as it is, not as the distorted material senses portray it. Humility is needed to accept the Christliness of man, made to express God. Pride, resentment, and human will would close our eyes to reality and its inherent harmony.

The Science of Christianity—Christian Science—reveals the spiritual, incorporeal nature of God and man. It enables us to prove that man is not a statistic, one among many subject to capricious human will, but is at one with God, divine Mind. As we apprehend man's true spiritual identity, we find this understanding transforming our own daily lives and the way we think of and react toward our fellowman.

Christian Science does not blindly ignore the claims of evil or leave the truth of God and man in the abstract, divorced from the problems of life. Based on the omnipotence, omnipresence, and omniscience of God, this Science shows that evil, expressed as racism, is the impersonal, supposititious opposite of God, having no real identity or power to influence, govern, or determine our thoughts or our experience.

"God is love,"I John 4:8; the Scriptures declare. The clear realization of the omnipresence of God, Love, nullifies the beliefs of divisiveness. The qualities of Love must enter into every facet of our life, expressing themselves as compassion and kindness, patience and justice, humility and good will, appreciation and mutual respect. Loving then ceases to be a platitude; it becomes an attitude.

The life of Christ Jesus exemplifies the necessity of consistently expressing the qualities of Christ, Truth. "This spiritual idea, or Christ," writes Mrs. Eddy, "entered into the minutiæ of the life of the personal Jesus. It made him an honest man, a good carpenter, and a good man, before it could make him the glorified."Miscellaneous Writings, p. 166;

Jesus' clear perception of man's true identity enabled him to discern the illusory nature not only of evil but of a personal sense of good. "And, behold, one came and said unto him, Good Master, what good thing shall I do, that I may have eternal life? And he said unto him, Why callest thou me good? there is none good but one, that is, God."Matt. 19:16, 17; Instead of claiming good as a personal attribute, Jesus saw it as a quality of God—and his only as God's reflection. By the same token, he maintained the perfect individuality of man against every claim of evil. So he condemned the sin, but not the woman taken in adultery (see John 8:3-11). His rebuke was always for the false characteristics that claimed to be part of selfhood. He saw immorality as no part of man's true identity.

The claim of dualism—that reality includes a presence apart from God and opposite to Him—seems to be intricately woven into the web of racism. Mortal minds, evil propensities, and stereotypes are common components of racist beliefs. Part of Webster's definition of "stereotype" is "a standardized mental picture held in common by members of a group and representing an oversimplified opinion, affective attitude, or uncritical judgment (as of a person, a race, an issue, or an event)."

To accept a standardized mental picture of anyone or any race is to deny the individual, infinite nature of being. The individual nature of God is infinitely expressed by each of His ideas. Each idea or reflection of God is distinct, expressing in a unique way God's attributes and qualities. No two ideas are identical, just as no two rose blossoms are the same. Life, God, expresses itself in newness, freshness, originality.

Clichés such as "They all look alike" or "They're all the same" are mortal mind's lies, which would trick us into accepting stereotypes of personality unless we're alert. Man is spiritual individuality—not good or evil material personality. If we accept limiting stereotypes, we personalize evil; this is the modus operandi of error, persuading us to deny the allness of God by believing in His supposed opposite.

God's qualities—such as intelligence, purity, and integrity—are universally expressed by His children, and this means we need not accept them as being limited to any particular segment of society. Conversely, mortal shortcomings—such as dishonesty, ignorance, and sloth—cannot be viewed as the proclivities of any one race or class. They are only the supposititious opposite of God and have no real identity.

As the false gives place to the true, long-held beliefs, practices, and concepts must give way to a more enlightened concept of identity, one that more nearly approximates the true view of man as spiritual. Because the leavening action of Truth is irresistible and irreversible, progressive steps or improved beliefs cannot truly be reversed. "An improved belief is one step out of error, and aids in taking the next step and in understanding the situation in Christian Science,"Science and Health, p. 296. Mrs. Eddy writes. As the leaven of Truth destroys the beliefs of racism in individual consciousness it thereby heals the belief universally.

Spiritual good, accepted in thought, cannot be reversed. The recognition of the all-embracing, impartial nature of God, divine Love, silences the suggestion that good is limited. We can know that rights and opportunities expressed by one individual can't deprive another, because one right idea does not deprive another right idea. Man, cognizant only of good, is at one with the divine Principle of his being. This fact must become progressively apparent in human affairs. 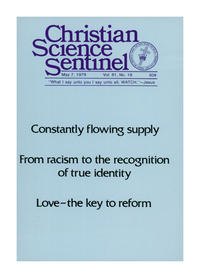