In August 1978 I lost consciousness while in my home

In August 1978 I lost consciousness while in my home. When I awoke, I could not speak or recognize anyone and was very weak. A relative found me in this condition. She notified others, including a Christian Science practitioner, who came at once to be with me and spent the night in prayer.

The next afternoon I recognized my daughter and the practitioner, and began to repeat "the scientific statement of being" from Science and Health by Mrs. Eddy. It begins (p. 468): "There is no life, truth, intelligence, nor substance in matter. All is infinite Mind and its infinite manifestation, for God is All-in-all." I could also recall the Lord's Prayer. And I was able to eat a little.

Send a comment to the editors
NEXT IN THIS ISSUE
Testimony of Healing
As a little girl in a home where no one went to church nor was... 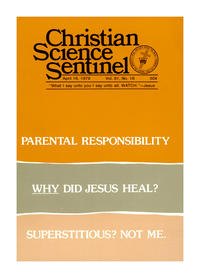