During the night I kept thinking about Paul's journey (see Acts 27 and 28), when he was being taken in custody to Rome to appear before Nero, the reigning Caesar. That journey was interrupted by shipwreck and a three-month delay in Malta. Not only were we on the same route, but it was the same time of year, and the same seasonable weather conditions prevailed.

The ship had been steady as she took us to some of the places associated with Paul's mission. Then we sailed south from Turkey—the "Asia" of his time—toward Crete, and so west for Malta. On this lap we headed into a storm. I found myself knowing in prayer that God, the only power, was with us, protecting us, and that therefore all was well. As our vessel pitched, I remembered that although the wheat ship of Paul's trip was among the strongest in his time, it was fragile in comparison with modern standards. What challenges Paul faced! And how obedient he was to take divinely guided, practical steps in overcoming them! 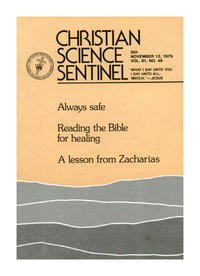