Relating to someone who is not a Christian Scientist

Taken at face value, the above disclaimer would seem to agree with Mrs. Eddy's statement: "All of God's creatures, moving in the harmony of Science, are harmless, useful, indestructible." Science and Health, p. 514; And, as such, easy to love. Yet, isn't it a fact that most often "some of my best friends are..." only thinly veils unhealed fear or prejudice against some group the speaker senses he ought to like but really doesn't. If some of my best friends really are Jews or blacks or WASPs or women or visitors from Saturn, I would see them not so much as members of an ethnic or sexual group, but as dear individuals, wouldn't I? But in this age of instant analysis and instant replay, people often find it convenient mentally to label, file, and discount those unlike themselves. We may be tempted to feel it takes a great deal of effort to get to know people and even more to see each of them as the spiritual likeness of God.

And so we fall into the we/they trap. 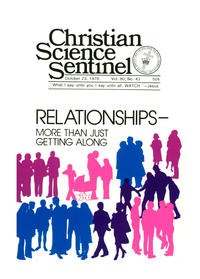