The Power of the Christ Overcomes Stress

Recently, after a period of hard work involving the meeting of multiple responsibilities, I felt burdened and strongly in need of spiritual refreshment. No sooner had I settled down to prayerful study than I received a call from a friend asking me to share some thoughts on how best to handle the problem of stress through Christian Science.

At first it seemed quite out of the question for me to respond to this request, since I appeared to be under stress myself. But it quickly became apparent that the call, however inappropriate humanly, was spiritually opportune. For it roused me to see how general in human thought today is the claim of stress: the belief, that is, that each of us is subject to pressures, tensions, and anxieties capable of robbing us of our strength and joy, and of producing harmful effects. 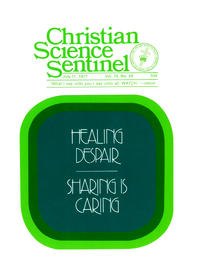