Jerry was the number six man on his high school basketball team. He got to play on the varsity team in many games, and he was usually the first one to go in when a substitute was needed for one of the five starters. His father was among the team's most loyal fans. So both Jerry and his father were disappointed the day before a game when the coach announced that one of the first five couldn't play and that another player had been chosen to take his place, instead of Jerry. Somehow it didn't seem fair.

Anyone who has played on a team knows that he has to think of the team first, not himself. Even if a player feels the coach has made a wrong decision, he has to go along with it. But Jerry knew something more—what Mrs. Eddy writes in Science and Health, the Christian Science textbook: "All is infinite Mind and its infinite manifestation, for God is All-in-all." Science and Health, p. 468; So when some of his teammates were upset about the coach's decision not to include him in the first five, Jerry tried to turn his thought away from resentment and dissension. He realized that because there is only one Mind, God, he and all the other players could only be under the control of divine intelligence, and nothing but good could result for them all. 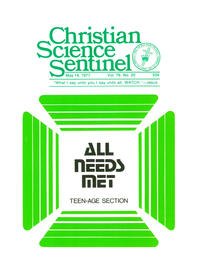