Like the psalmists, I too should like to sing praises to God and tell of a healing that occurred in our family.

My husband and I were told of a baby girl we might adopt, who had been born with clubfeet, and who would therefore require medical attention. The welfare officer knew we were Christian Scientists and realized we did not use medical means for healing. We were grateful that she was willing to entrust this little one to us, and grateful also for the challenge. We were told that the child's were in plaster and must remain so until she was twelve weeks old. After that time she was to be fitted with special corrective boots.

Send a comment to the editors
NEXT IN THIS ISSUE
Testimony of Healing
When Science and Health with Key to the Scriptures by Mary Baker Eddy... 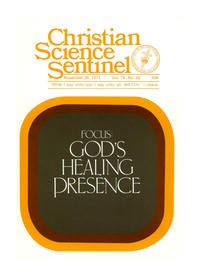