Christ's way is the only way

At a United States naval air base in another country, where my husband and I were stationed, the commanding officer came to me saying there were many dependent children around who didn't have anything to do with themselves. They were bored, their morale was down, and their conduct not good. He told me several efforts had already been made to form a teen club for these youngsters, but without any success. And he added that because of my professional experience in working with children he wondered if I'd be willing to organize a club. I thought about it prayerfully for a few days, then told the captain I would be glad to help.

Very soon I selected two other people to assist me in writing the constitution for the group. The base legal officer promptly praised and approved it, and within one month the club was completely organized. The commanding officer was amazed at how swiftly the whole matter was completed. He asked how I had done it. I told him I had the help of the Bible and of another book, Science and Health by Mary Baker Eddy, and that these gave me the understanding of the qualities of true leadership and how to express them. Mrs. Eddy says in her Message to The Mother Church for 1901, "Godliness or Christianity is a human necessity: man cannot live without it; he has no intelligence, health, hope, nor happiness without godliness." Message for 1901, p. 34; 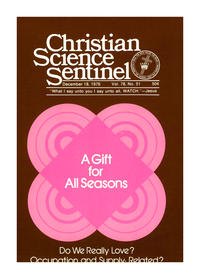