As a youngster I recall, before my family was introduced to...

As a youngster I recall, before my family was introduced to Christian Science, my mother suffered a great deal. The doctors who were attending her had operated for a stomach disorder but gave no encouragement of improvement. She was left in a state of hopeless despair.

It was at this time a kind friend of the family told my mother to try Christian Science treatment, in view of the dismal medical prognosis. Willing to try anything that offered hope of relief, Mother called on a Christian Science practitioner, who immediately commenced prayerful treatment. Through her own study of the Bible, and Science and Health by Mrs. Eddy, and the prayers of the practitioner, Mother gained a glimpse of her true spiritual identity and was completely healed.

Send a comment to the editors
NEXT IN THIS ISSUE
Testimony of Healing
For having had the joy of attending a Christian Science Sunday School,... 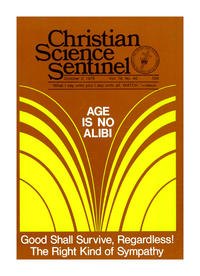