One fall day a college student noticed that two classmates sitting near him were uncomfortable. Both were displaying the symptoms of a cold. He began to fear that he, too, might suffer from a cold, and he considered moving to another seat.

But he knew through his study of Christian Science that he should not be afraid, and he began to consider how he could apply Science to the situation. He recalled that Mrs. Eddy says in Science and Health, "The physical affirmation of disease should always be met with the mental negation." Science and Health, p. 392; In this case, the physical affirmation was evident, but what was the mental negation? He saw he had to deny that sickness had any power over him or his fellow students. Wasn't it the truth that good, not evil, is contagious because good is real and evil is not? Instead of changing seats, he had to change his thoughts. He declared his proximity to God— God's presence right there. He remembered, too, that Paul wrote, "Be not overcome of evil, but overcome evil with good." Rom. 12:21; 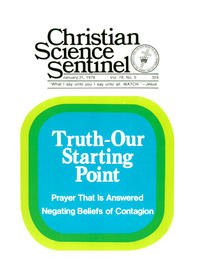