Christian Science has always been a way of life for me

Christian Science has always been a way of life for me. But it wasn't until I joined the Air Force that the opportunity to really prove God's care came to me. During basic training I had an instantaneous healing of measles. This came about by putting self aside and acknowledging the all-presence and omnipotence of God. Later, at my second base, a great feeling of depression and unhappiness was healed by prayer to have a better understanding of my true place. I knew each one dwells with God, as the ninety-first Psalm tells. God is everywhere, so no matter where I was, God was there, and I was always in my right place.

The most significant healing occurred when I, a fireman, was squirted in the eyes with a powerful chemical used in fire extinguishers. We were called on an emergency inflight landing. A plane was coming in with a landing gear problem. As I jumped in the truck to rush to the scene, it was already pulling away. I struggled to close the heavy door, and in doing so hit the fire extinguisher with my elbow. For some reason the safety pin was missing and the liquid from the extinguisher poured out. I was hit by the liquid on the side of the face and in one eye. The truck stopped.

Send a comment to the editors
NEXT IN THIS ISSUE
Testimony of Healing
When I was a child I received a blow that resulted in a broken... 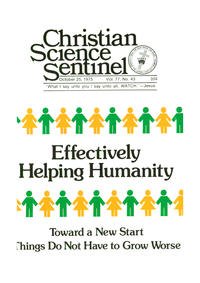