[Ability to demonstrate Christian Science comes with study and practice of the truth taught by Christ Jesus and revealed in Science and Health. This series touches upon some ways in which this truth can be applied.]

Healing by exercising the power of Mind over matter

The solid "billiard ball" concept of matter's atomic constituents is outdated by today's atomic physics. But Christian Science goes much further by revealing that matter is entirely insubstantial. It recognizes that God, the one creator, is Spirit, divine Mind, and that His creation (the only true universe) is exclusively spiritual. Despite matter's seeming substantiality, Mrs. Eddy says, "The material atom is an outlined falsity of consciousness, which can gather additional evidence of consciousness and life only as it adds lie to lie." Unity of Good, pp. 35, 36;

If one realizes that a single atom is a falsity, one can understand that the whole colossal compound of atoms mankind sees in the belief of a material world, as well as in a material body, is likewise "an outlined falsity of consciousness"—merely the objectification of false mortal thought. So, one faced with an instance of discord and disease can reject it as part of the falsity of an unreal mind. He can replace it with true thoughts from the one real, divine Mind. This corrects false belief and, by improving the objects of consciousness, heals discord and sets the body free. 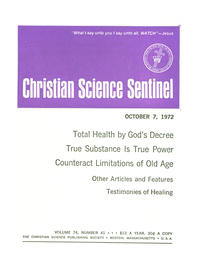