It seems that just about every day one finds an article about...

It seems that just about every day one finds an article about drugs and youth in a newspaper or magazine. I've read articles that list many different kinds of drugs and their degree of potency. In these articles we can see how subtle mortal mind tries to be. For example, these articles list the various kinds of drugs and give each one a different degree of power which, in turn, tells how an individual is affected by it and how he is supposed to react to it. In other words, they give power to matter. By acknowledging that these drugs possess different degrees of strength, such as saying that LSD is stronger than marijuana, one leaves himself wide open to mortal mind's subtle way of placing agonizing fear into one's life. This puts us in a position where we can't help anyone else. Christian Science teaches us that there is no power in matter, never was, and never will be. The only power that it seems to have is that which we give it.

About three years ago I walked into the office of a Christian Science practitioner in Hawaii. I was under the influence of a drug that was supposed to be stronger then LSD. I was emotionally upset, confused, and desperately in need of someone to talk to. Just five months earlier, I had left the mainland because I couldn't stand the situation that the world seemed to be in and all the people living around me who seemed to me so hypocritical. I told the practitioner that I hated the military because they were killers, and that I had taken the strong drug intentionally so as to fail my preinduction physical examination for the Army. This attempt had failed, and my fear and anxiety seemed to get even worse.

Send a comment to the editors
NEXT IN THIS ISSUE
Testimony of Healing
Forty–five years ago, when I was a very young student of Christian Science,... 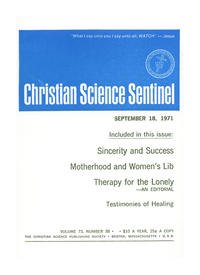