Many years ago I was working in an office where there was...

Many years ago I was working in an office where there was much discord. Domination and self-importance were much in evidence. This aroused in me antagonism and self-will. Eventually I became ill with a very severe disability in the form of rheumatism.

As a student of Christian Science, I realized that my thought needed to be corrected, that I must not harbor thoughts of resentment and anger toward the person involved. But how to overcome these thoughts presented a problem. I tried with willpower to express more love, but that did not work, since I was trying to love a person who seemed to me to be very unlovable. Then after much suffering I was forced to rise higher in thought, to see not only myself as an idea of Love but to see my neighbor also in this light. I saw that in the all-presence of infinite Love there never was nor could be anyone unlovely or unlovable, and I endeavored to correct every wrong thought.

Send a comment to the editors
NEXT IN THIS ISSUE
Testimony of Healing
In 1964, while a guest at the Christian Science Benevolent Association... 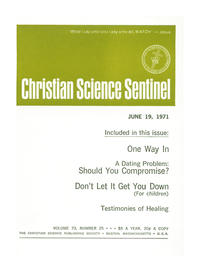