Searching for social justice and equality, women cry, "It's a man's world!" And the quest becomes a struggle to possess half of it. But the world is ours—it is not "his" world or "her" world. It is ours to possess, share, and enjoy. And yet, just at the very moment when the need for mankind's unity is greatest, there is hostility and wrenching apart, sexually, racially, and culturally.

Although prevailing social laws and customs may seem to have hidden the demand for it, the deepest need is for liberation of both sexes, and increasingly both men and women are realizing this fact. In a parallel movement to women's liberation a number of male groups announce their purpose to break the patterns formed for men by centuries of conditioning. The recognition that, in spite of male domination in spheres of government, law, and professions, men are frequently frustrated and unfulfilled focuses attention on the mental influences that set both male and female patterns.

Send a comment to the editors
NEXT IN THIS ISSUE
Article
There's Jam in Your House, Too 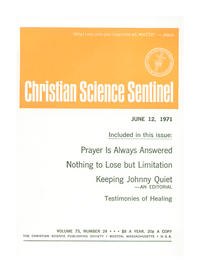