To a woman who had had five husbands and was living with a man who was not her husband, Christ Jesus revealed the nature of the "living water." If he showed his disapproval, could it not be that Jesus also detected in her a desire for something better than the lot generally given to women in a world ruled by men? Whatever he recognized in her, he said to her, "Whosoever drinketh of the water that I shall give him shall never thirst; but the water that I shall give him shall be in him a well of water springing up into everlasting life." John 4:14;

This revelation is surely a message to both men and women who may be seeking liberation from the myth of dependence upon someone of the opposite sex. In the Science Jesus lived and taught, man depends upon God alone. Christian Science explains that God is both Father and Mother, and that man, the image and likeness of God, is the reflection or idea of God's manhood and womanhood. 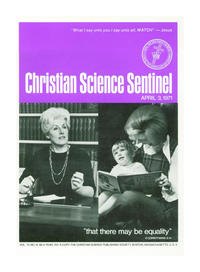