Long ago, physicists studying the nature of light found that it has the characteristics of a vibration, or wave motion. Though it is not possible to say what is vibration, nevertheless light is commonly regarded as consisting of waves, albeit in some aspects it also seems to act as if made up of discrete particles.

More recently it has been found that atoms and the subatomic particles that constitute them also have the characteristics of waves. Most properties of matter as well as of light and other forms of energy may be deduced from the so-called wave equation. It appears to be so basic that some suppose it may eventually account for the entire physical universe. This is the theory of quantum or wave mechanics, which has been of great utility in the sciences. 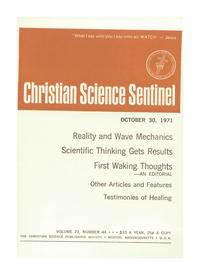