A Matter of Consent

Although the Bible gives many instances of evil forces overcome and disasters averted by the power of prayer, Christians of today show little evidence of faith in such power where similar problems are concerned. Today the emphasis among theologians seems to be upon getting out and doing rather than kneeling down and praying. Christian Science reveals the fact that all things are possible to God now, even as they were in Biblical times. The healings brought about through prayer in Christian Science are demonstrations of this fact.

For the power of prayer to become effective in the solution of difficult human problems today, however, one thing is required: the consent of the human mind. A simple illustration of this is given in a letter by James J. Rome written to Mary Baker Eddy shortly after the building of the extension of The Mother Church in Boston in 1906. Having the building ready for the opening service on June 10 seemed impossible, but through the prayers of the Christian Scientists working in support of the building all obstructions were removed and the edifice was completed in time. 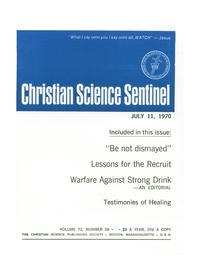