An Interview: on mental health

with contributions from Marion Russell

What led you into mental health nursing?

A longing to understand life and people, and also the desire for service. It led me into an enormous amount of exploration academically, socially, and professionally. I had a good deal of exposure to psychiatry along the way in university and professional courses. I worked for a long time as a psychiatric social worker in a clinic along with psychiatrists—competent psychiatrists, really. I found that though they were doing the very best they could, they were often uncertain and discouraged. They were dedicated people, and invested themselves thoroughly in efforts to help. Yet, after hours they might say, "Now let's be honest. How many people do you think you have really helped?" Their discussions showed me how really limited even well–trained human beings are in their ability to help another human being through human methods. I also explored various religions—six of them! I was trying to find a denomination that had dynamic meaning for its members. Meanwhile I went on with my career, and eventually found myself at Yale. Then I met a friend who healed human problems through spiritual understanding. She was a Christian Scientist.

Miss Marion Russell is now doing work in adoptions in Rhode Island. Until she felt the need to be free to explore Christian Science, she was engaged in doctoral work, and was associate professor and director of the Division of Mental Health Nursing in the Yale Graduate School and Yale School of Nursing. Previous to that she was in psychiatric social work. 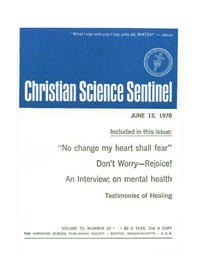