Although I had heard of Christian Science for many years, it was...

Although I had heard of Christian Science for many years, it was not until 1934 that I began its study. I was operating a public stenographic service in a large office building. One of my customers who occupied an office in the building was a practitioner and teacher of Christian Science. He frequently brought his writings to me to be copied on the typewriter. Although I employed several typists who did this work, I always proofread work before delivering it to the customer. In so doing I was greatly impressed with his writings, so I went to his office. I told him I felt that Christian Science was something very special, and I wanted to know more about it because I felt it would be good for me.

At that time my life was not too happy, my health not very good (I was twenty-five pounds underweight), and I had difficulty in earning enough money to support myself. I was depressed and despondent much of the time. I had joined an orthodox church at age fifteen but had lost interest and discontinued attending the services. The practitioner loaned me a beautiful copy of the Christian Science textbook, Science and Health by Mrs. Eddy, and told me to read it from beginning to end. He said, "You will come to portions you may not understand, but just keep on reading, and when you have finished the book, you will find you have absorbed a large part of it." That is exactly what happened. For weeks I worked all day and hurried home each evening to read that wonderful book far into the night. I was like a dry sponge soaking up water. I was spiritually starved.

Send a comment to the editors
NEXT IN THIS ISSUE
Testimony of Healing
Christian Science was introduced to my parents before I was... 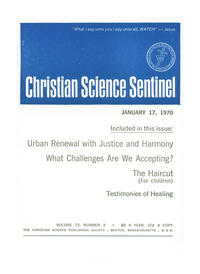