"A staff upon which to lean"

It is recorded in the Bible that when God told Moses he was the chosen one to deliver the children of Israel out of Egypt, Moses had great fear of his inability. In order to break this mesmeric fear, God commanded him to cast down his rod. As he did so, the rod became a serpent; and Moses fled from before it." Ex. 4:3;

In the Glossary of Science and Health Mrs. Eddy defines "serpent." Part of the definition reads, "The first lie of limitation" and another part, "The first delusion that, error exists as fact." Science and Health, p. 594; To Moses, the serpent apparently symbolized the belief that there is an evil power that can thwart God's plan of action, that man is a mortal bound by chains of limitation and fear, that man can be overpowered by this mesmerism. 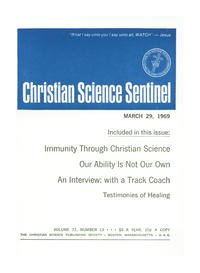