[The above is an abbreviated, postproduction text of the program released for broadcast the week of February 14—20 in the radio series, "The Bible Speaks to You." Heard internationally over more than 1,000 stations, the weekly programs are prepared and produced by the Christian Science Committee on Publication, 107 Falmouth Street, Boston, Massachusetts, U.S.A. 02115.]

RADIO PROGRAM NO. 359 - Communicating with the Younger Generation

[The speaker is Jerome Franke, a municipal judge. The questioner is Theodore Clapp, a guidance counselor.]

Questioner: Communicating with teen-age sons and daughters is at times quite a challenge. Differences arise, disagreements occur, and withdrawal can often result. As one contemporary observer has noted, in some instances young people today "are not fighting their parents. They're abandoning them."Speaker: I think all of us in the over-thirty group have had experiences with our young folks which indicate that from time to time there is a sense of withdrawal or abandonment. So it's very important for us to realize that we should be talking with our young people, not simply at them. This means listening to them. 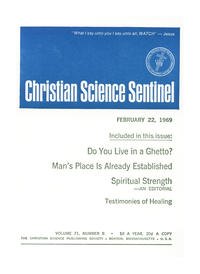