Ghosts in the Attic

Many of us are haunted by ghosts, or latent false beliefs, sometimes without our even realizing it. This was true the case of one Christian Scientist who had accepted the truths of Christian Science for years and had many lovely healings. There came a time, however, when she was faced with a physical difficulty that was not quickly healed. The practitioner who was helping her suddenly asked her one day if she felt she was not loved. She then realized deep inside her a feeling of being unloved that she had not been conscious of. As the practitioner assured her of God's love for her and the reflection of this love toward her by others, it seemed that a great burden began to lift. Then she saw her need of destroying utterly the belief in an unhappy past.

When she was a young girl, her school days had been joyless ones. As she grew up, habits and patterns of thinking were that tended to feelings of inferiority, constant wistfulness, and a longing for good which seemed unobtainable. Now she realized the great importance of ceasing to dwell upon or even accept such a past. She saw that until this was done the erroneous mental pictures would continue to haunt her and rob her of her happiness and even of her physical freedom.

Send a comment to the editors
NEXT IN THIS ISSUE
Article
Jesus' Works: Truly Scientific 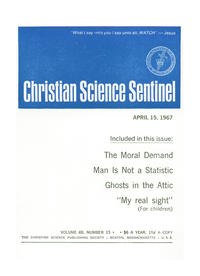