I should like to express my gratitude for being introduced to...

I should like to express my gratitude for being introduced to Christian Science. I did not take up the study of it for any healing, but because its explanations of what God and man are were so much more logical than any I had heard previously.

Since then I have had many healings. One experience which has stood out for me was the birth of my daughter. Three months before she was due, something happened which the doctor in attendance said meant the birth would take place within a few hours, or at the most within a few days. He also said that I should not have too much hope that the baby would live. But this did not disturb me, as I had the help of a Christian Science practitioner and, most important, of our Father-Mother God.

Send a comment to the editors
NEXT IN THIS ISSUE
Testimony of Healing
I shall never cease to be grateful for the way I was led to the... 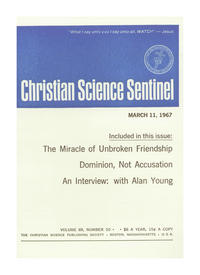