What Can I Do for Peace?

World War I was to be the last of all world wars, and the establishment of lasting peace was the goal of the League of Nations. But in twenty years another war cloud appeared and broke into World War II. Since then, the United Nations has worked diligently to contain several other wars and remove threats of global war. Mankind yearn for peace, and citizens of the world desire to contribute to it. The individual feels insignificant and inadequate for such an awesome task, but the search goes on in the hearts of men: What can I do?

Christ Jesus has given instructions by which each of us may work toward a better and more peaceful world. One of his answers to What can I do? is a powerfully practical one. He said, "Thou hypocrite, first cast out the beam out of thine own eye; and then shalt thou see clearly to cast out the mote out of thy brother's eye." Matt. 7:5; 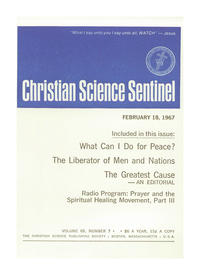