[The above is an abbreviated, postproduction text of the program released for broadcast the week of August 19-25 in the radio series, "The Bible Speaks to You." Heard internationally over approximately 1,000 stations, the weekly programs are prepared and produced by the Christian Science Committee on Publication, 107 Falmouth Street, Boston, Massachusetts 02115.]

Announcer: The era we live in has been called many things, including the "Space Age," the "Electronic Age," and the "Age of Anxiety." To many the latter is the most descriptive term because anxiety and fear seem to be so much a part of contemporary life. Many people regard fear as a normal condition of modern life and feel they have to live with it.Questioner: We certainly don't have to live in a war zone to have a feeling of fear and anxiety. Many of us are plagued with the garden-variety types of fear— sickness, loneliness, job insecurity, and this kind of thing. But what can the individual do about it?Speaker: I'd like to ask you a question. Do you feel that fear is a natural, inevitable part of a person's existence?Questioner: Yes, I do.Speaker: Well now, this is where I would disagree. I don't think fear and anxiety are natural to man. We can remove them from our experience to a very great extent, at least if we're conscious of what it is that brings about anxiety or fear. We might think of fear and anxiety as evidence of an inner spiritual hunger. They indicate an unfilled yearning for the feeling of assurance that we have the protection, love, and security right at hand which will remove the element of fear from our thought if we can be aware of them.

If we will admit that fear has its basis in an element of spiritual hunger, then it would follow that the remedy for it must be spiritual. 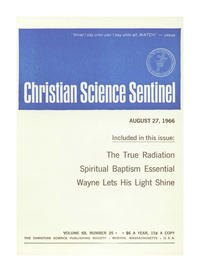