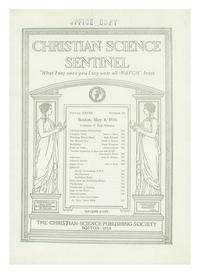 If we could always correctly read the hearts of men and women, pierce through the veil of belief and know what they were most longing for, most hoping for, we might be surprised to discover how often the dominant desire would be found in the yearning wish for harmonious unity with some other individual or group.
Article

In I John we read, "Beloved, now are we the sons of God.
Article

The demonstration of the law of Life and Love, as taught in the Beatitudes, may be regarded as climbing.
Article

"The poet's line, 'Order is heaven's first law,' is so eternally true, so axiomatic, that it has become a truism; and its wisdom is as obvious in religion and scholarship as in astronomy or mathematics.
Article

"Neither beginning of days, nor end of life"

Christian Science teaches that God is the only Life, eternal, infinite, immutable; that man is inseparable from this Life; and that as the pure reflection of the eternal One, man is without mortal limitation or time-sense, without beginning or end.
Article

In the Sunday Oregonian an article, "My Religion,"...

Theodore Burkhardt, Committee on Publication for the State of Oregon, - Portland

In the Sunday Oregonian an article, "My Religion," contains a statement which needs correction.
Article

Your correspondent repeats his assertion that Christian Science...

Your correspondent repeats his assertion that Christian Science is a negation of the gospel revelation, and adduces a further reason.
Article

We have just been handed a copy of a recent issue of your...

George C. Palmer. Committee on Publication for the Province of Saskatchewan, Canada, - Saskatoon

We have just been handed a copy of a recent issue of your paper, and notice a letter in which the writer, in referring to another correspondent, says: "He reminds me of Mrs.
Article

In a paper read at the annual retreat of the Bendigo Presbytery...

In a paper read at the annual retreat of the Bendigo Presbytery and reported in a recent issue, Dr.
Article

In a recent issue of your paper, "The Daily Clinic"...

Richard E. Prince, Committee on Publication for the State of Virginia, - Norfolk

In a recent issue of your paper, "The Daily Clinic" column contained a reference to Christian Science which requires correction.
Poem

How can we know the truth of grace divine,Unless we know a love so deep, so true,That, free from self and all demands, all signOf condemnation, we can look clear throughThe outward seeming to the image pure,Can let our love shine round it like the light,With tenderness, compassion, feeling sureThat God's reflection must be ever bright?
Editorial

On the Overcoming of Evil

Christian Scientists are awake to the necessity of constantly being on guard against the attempted encroachments of evil; they know the need of keeping their mental gates closed against the common enemy.
Editorial

Mortals are always tending to vacillate between extremes.
Editorial

All the world to-day is clamoring for its rights.
Article

Churches and Societies in the United States proper and in the Dominion of Canada, wishing to give lectures during the first two months of the next lecture year, namely July and August, 1926, are requested to inform the Board of Lectureship, if possible, before June 1.
Testimony of Healing

It is fifteen years since Christian Science came to me in...

It is fifteen years since Christian Science came to me in the darkest hour of my life, when it seemed as if there was not a ray of light to lead out of the darkness.
Testimony of Healing

I was brought up in a so-called orthodox church, taught...

I was brought up in a so-called orthodox church, taught to pray night and morning and to attend the church services, which I did for many years.
Testimony of Healing

Christian Science came to me at a time when I thought...

Christian Science came to me at a time when I thought the sun in my life had gone down never to rise.
Testimony of Healing

In December, 1921, I was taken ill with inflammation of the knee joint.
Testimony of Healing

In the years that I have been interested in Christian Science...

In the years that I have been interested in Christian Science I have had many wonderful healings.
Testimony of Healing

It was a desire for healing which led me into Christian Science,...

It was a desire for healing which led me into Christian Science, and I have certainly proved the truth of the statement that "man's extremity is God's opportunity.
Testimony of Healing

It is now over four years since I began the study of Christian Science;...

It is now over four years since I began the study of Christian Science; and with a family of five I have had many proofs of its health-giving power.
Testimony of Healing

In July, 1922, I was attacked with a severe illness.
Testimony of Healing

So much good has come to me through the study and...

So much good has come to me through the study and application of Christian Science that I should like publicly to express my gratitude.
Testimony of Healing

It is with gratitude that I testify to the many blessings...

It is with gratitude that I testify to the many blessings and healings that have come to me since I came into Christian Science over four years ago.
Article