The Swallowing up of Mortality

Paul recognized and presented a clear sense of truth when he wrote to the Corinthians, "We that are in this tabernacle do groan, being burdened: not for that we would be unclothed, but clothed upon, that mortality might be swallowed up of life." Now there is nothing which causes mortals greater trepidation than the belief that they may, apparently without their immediate knowledge or consent—gradually or rapidly, partially or fully—be deprived of what they imagine constitutes their mortal selfhood. Indeed, in such belief may be found the reason for a multitude of the fears which beset them. Looking to matter for identity, mortals are ever thinking they may be depleted by the loss of some form of matter, and they measure their existence by what they believe material conditions to be.

It has therefore afforded small satisfaction for mankind to be told that the loss of all matter, which it had been taught to believe would result through death, would usher it immediately into the bliss of Spirit and spirituality. This false presentation of death as a friend has never brought any real comfort. Although Jesus stated positively, "I am come that they might have life, and that they might have it more abundantly," Christians have supposed this to apply only to a life after death; even they have not understood that this proposition of Jesus was one that could and should be accepted and demonstrated by every one right here and now. 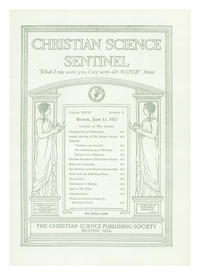