In her Preface to the textbook, "Science and Health with Key to the Scriptures" (p. x), Mrs. Eddy refers to a few books based on the teachings of Christian Science as being useful, and she contrasts this statement with a reference to various books of which she says that most are incorrect. Christian Scientists know that Mrs. Eddy has fully elucidated her discovery in her writings. Many books have been written and published as an aid to Bible students, and a number of these have been prepared by individuals who had gained some knowledge of Christian Science and felt that their views or the results of their research would be helpful to others. A few of them are interesting or helpful, and our Leader on rare occasions commended a work based on the Scriptures which represented an enlightened thought; but to most of such works cannot be given the commendation that they are particularly helpful to Christian Scientists. The first Tenet of our faith reads, "As adherents of Truth, we take the inspired Word of the Bible as our sufficient guide to eternal Life" (Science and Health, p. 497); and, truly, the Bible and our Leader's writings explaining the Scriptures are complete and sufficient to enable us continuously to gain in understanding and application of the truth. It is not necessary for Christian Scientists to study voluminous Bible commentaries, dictionaries, reference books, and compilations of Scripture from various versions of the Bible. All of these must necessarily represent somewhat of the compiler's personal viewpoint or manner of approaching a subject, which may not be the best for others. Sometimes these so-called helps may tend to formalism and away from the initiative, inspiration, and revelation which should accompany individual effort. While some versions of the Bible other than the King James are helpful to the student, none of them has the place the King James Bible occupies among Christian Scientists or among the English-speaking peoples. That masterpiece, compiled by devoted and inspired scholars, has never been surpassed, and certainly cannot be by the efforts of a single individual. Our Leader studied it daily, and desired and required that it be used in all our public church services.

Because Christian Scientists had been importuned to purchase books for which Mrs. Eddy's endorsement was unwarrantably claimed, Mrs. Eddy caused to be inserted in the Christian Science Sentinel of May 8, 1909, the following notice: 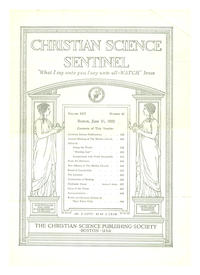