As there is only one Mind or consciousness, all that can be known of anything must proceed from this infinite source. Any suggestion of so-called mortal mind is merely the belief in a supposititious opposite of the one Mind, which knows only real ideas. Hence, in seeking the truth concerning any situation, real facts can only be gained through spiritual understanding. Anything learned from the human mind should not be credited, since its purpose is to counterfeit the true sense, thus robbing mankind of their right to know the truth. One of the ways this seems to operate is to pervert the meaning of words. Mrs. Eddy has made this very clear in the Glossary of "Science and Health with Key to the Scriptures," where she gives the material definition of various words, followed by their metaphysical or scientific definition; and in studying these in the light of Christian Science a clearer sense of other terms is revealed.

Take, for instance, the word "living," which is so often used in connection with our daily experiences. One who has not been much in the world at large frequently hears the expression, "Oh, well, you have not lived," or, "When you really live you will see things differently," and the like. The meaning of the word conveyed in this use of it would apparently be that one must go through certain human experiences and perhaps suffer a great deal in order to gain wisdom or learn what it means to live. In other words, one is told that he who does not seek pleasure in matter or experience the pangs and disappointments of material existence has no knowledge of life, and is outside the pale of the initiated. 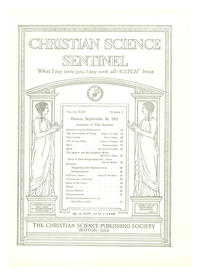