It is with a heart full of gratitude that I testify to the...

It is with a heart full of gratitude that I testify to the healing power of Christian Science. When I first heard of Christian Science many years ago, I was a mental and physical wreck, suffering from many things, one of which was spinal trouble, for which I wore a spinal jacket. My profession is teaching, and I was ordered twelve months' rest from this work. During this time I consulted many of the leading specialists in London and elsewhere, and carried out every form of treatment which material medicine could suggest, with but slight temporary benefit. I was told by one doctor that there was no cure for me, and the official doctor who examined me before I returned to work said he saw very little improvement and that in a few months I would break down again; then I would have to resign. Soon after, as I was approaching a state of collapse, I heard of Christian Science. I procured and read the Christian Science textbook, "Science and Health with Key to the Scriptures" by Mrs. Eddy. The first chapter, on Prayer, appealed to me very strongly, and I knew that I had found that for which I had been hungering for many years. I began treatment, and was immediately healed of sleeplessness of long standing, which had resulted in an exaggerated condition of fear. The healing of the physical condition, though slow, was continuous and complete. From the day I started to study the textbook I have had no medicine or material remedies of any kind, nor have I been absent from school for one day through sickness or incapacity during the years that have since elapsed, and I have been able to do all the work that has been required of me,—in my profession, in my home, in social reform work, and for many years now in Christian Science church work. Those who observe me but who do not understand the sustaining power of Truth are astonished at the large amount of work I am able to get through.

Christian Science brings me inexpressible hope, comfort, and joy. It has opened up the Bible and makes it the most interesting study, whereas before I had the Christian Science textbook I looked upon the Bible as a collection of contradictory myths and superstitions of no practical value, rather than a book calling for intelligent study and application to everyday affairs. In the Bible, the textbook, and the other writings of Mrs. Eddy, I find an inexhaustible mine of treasure, ever unfolding God's goodness. I am very grateful for the Christian Science periodicals, and I cannot say how much the Monitor has helped me; it is to me an educational necessity, clearing up for me the answer to the perplexing problems in public affairs which are occupying the attention of the world. Above all I am grateful to our beloved Leader, Mrs. Eddy, for her clarity of vision, for her life consecrated to the good of mankind, and for her courage in standing for the truth.

Send a comment to the editors
NEXT IN THIS ISSUE
Testimony of Healing
For years I have been greatly benefited by the testimonies... 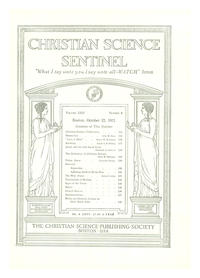