From the speeches and writings of statesmen and...

From the speeches and writings of statesmen and others in all parts of the world it is becoming more and more evident that the conflict through which humanity is passing is being generally recognized to be the Armageddon of ideas. This statement has, in fact, already become trite. That, however, which is not so generally perceived, is that this is not an entirely novel state of things, for sometime toward the end of the first century of the Christian era, Paul of Tarsus wrote to the Christians in Ephesus, "We wrestle not against flesh and blood, but against principalities, against powers, against the rulers of the darkness of this world, against spiritual wickedness in high places;" and to the Corinthians he said, "The weapons of our warfare are not carnal."

In "Miscellaneous Writings" (p. 12) Mrs. Eddy writes: "Mortal mind at this period mutely works in the interest of both good and evil in a manner least understood; hence the need of watching, and the danger of yielding to temptation from causes that at former periods in human history were not existent. The action and effects of this so-called human mind in its silent arguments, are yet to be uncovered and summarily dealt with by divine justice." Taking these two statements together, and comparing them with the article called "Ways that are Vain" in "The First Church of Christ, Scientist, and Miscellany" (p. 210), it is impossible to avoid the conclusion that we are faced today with conditions similar in a degree to those which confronted the apostle, and that we must use his weapons if we are to emerge victorious from the battle.

Send a comment to the editors
NEXT IN THIS ISSUE
Article
Many, with blind faith in the teachings of their fathers,... 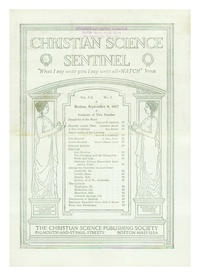