Sharp criticisms that appeared in local papers on the...

Sharp criticisms that appeared in local papers on the lecture delivered on the subject of Christian Science supply a somewhat amusing topic of conversation to those who are not interested in religious matters. To him who does not profess to be a follower of Christ's doctrine, Christian Science appears to be but a new religious sect. The theory propounded by Christian Science, especially that of divine healing, is perhaps a novelty; but we see nothing wrong in it, because healing is admitted to have been performed by Christ himself. Fair-minded and unprejudiced outsiders fail to understand why a certain denomination which preaches the uplifting of manhood to the level of godly holiness should be assailed as a heresy.

The trouble is no doubt due to the singular newness of the creed, which if accepted by the world will cause the services of medical practitioners to be dispensed with. The public invariably receives a new idea with ridicule and contempt. The steam engine, electricity, the airship, the submarine,—in fact all startling inventions,—were scoffed at on their first announcement. Methodists, Presbyterians, Baptists, and other denominations were subjected to persecution at their advent; yea, Jesus himself was mobbed and crucified.

Send a comment to the editors
NEXT IN THIS ISSUE
Article
Jesus said, "Verily, verily, I say unto you, He that believeth... 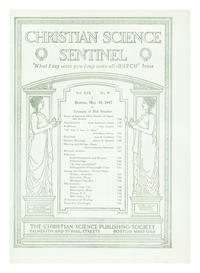